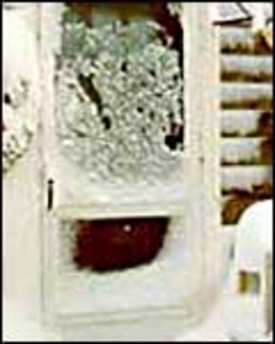 When the Christmas goose is finally all eaten, icy paths are not far behind. It helps to know all the alternatives to prevent slipping, sliding, and accidents.

There are two main ways. One is to melt ice down to bare surfaces. The other is to cover the ice with something gritty or not slippery. When ice builds up thicker and thicker, it takes a lot of time until it melts all the way down, so ideally one should try to keep it under control.

Melting is done with soluble salts which lower the freezing point of water. If it can’t freeze, it stays liquid and non-slippery, then evaporates when the air is clear.The common salts are Sodium Chloride which is table salt, and Calcium Chloride because both of these have freezing points well below that of water. Plain water freezes at +32° F., while sodium chloride’s minimal freezing temperature is minus -21° and calcium chloride’s is minus -55°. The more salt, the lower the freezing temperature will be.

Calcium Chloride is less damaging to plants but costs considerably more than table salt. Cost may be an important factor if one is doing a huge area, but it doesn’t add up to much more for home use. Calcium Chloride is better at lower temperatures, while Sodium Chloride is generally used when it isn’t so cold. During storage, both absorb water from the air and can cake, especially the calcium. Occasionally potassium chloride is also used, too.

Other Salts suggested for home use which are better for grass and plants are fertilizers such as urea and 5-l0-5. Both are more expensive than calcium chloride, and urea is also much kinder to metals and concrete.

In one test, urea and sodium chloride were compared at the rate of l pound per l0 square feet. The urea worked well at just around freezing, while the sodium chloride was much more effective when the temperature was several degrees below.

One Important Thing in controlling ice is to shovel the walks as bare as possible. Then less salt will be needed to melt down the thin layer that’s left.

Gritty Substances, Like Sand, Ashes, and Kitty Litter form an abrasive surface which helps prevent slipping. The problem is that they freeze into the next snow or icy rain, and make a thicker layer. Ashes, being dark, absorb heat in sunlight and so hasten melting. They also have some salts which dissolve and lower the freezing point a little but not as much as sodium or calcium chloride. Kitty litter also has some salts which help it a bit.

Tracking These into the House All of these substances, both salts and abrasives, are carried indoors on shoes which ruin nice hardwood floors and carpets. Ashes and kitty litter are particularly bad so you may want to have an inside doormat . The Japanese give guests house slippers to protect their straw floor mats.

Environmental Landscaping Planning is useful, for it can reduce ice buildup, and the need for so much salt and shoveling . The winter sun melts ice, especially over dark surfaces. That is why blacktop is the preferred driveway surface in northern areas. If bushes or trees on the south side of paths or driveways block the sun, it may be worth cutting them low, or removing them to let the sunlight warm slippery places. Remember that the sun is very low in winter, so check it’s actual height at 9 AM first before you cut anything down. (The winter sun is warm only between 9 AM and 3 PM.) Sometimes just removing lower branches of trees will let the low sunlight through underneath instead of cutting them down entirely.

Old Fashioned Duckboards are useful but few people have them now. They can stand on their sides during storms, and then be laid on top of the snow and ice for a safer surface. A more modern idea is to save old carpeting in 2 foot strips and roll them out on top of snow and ice. They are especially good for parties where you don’t want guests tracking in salt and grit onto the floors.