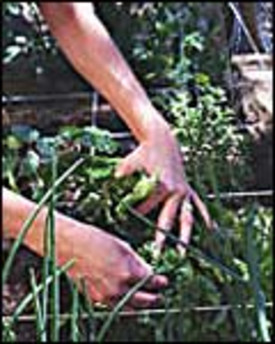 In northern states, August is the best month to divide perennials because the ground is warm and the sun high, so with water the transplants can develop a good root system before winter. Most will flower next year.

It’s best to hold the digging until they have finished flowering, so one usually starts with the earlier blooming varieties. And though each flower has it’s own little idiosyncrasies, most respond to plain old fashioned replanting.

Which means: Dig a good deep hole. Enrich the soil with compost, superphosphate, lime and maybe a little manure in the bottom if you have it. Don’t skimp on this soil preparation for it is the secret of future longevity and success.

Then dig the perennial to be divided. Gently separate it, keeping the roots attached to each shoot. (Most clumps have natural divisions.)

Carefully replant in the new soil, firming them by pressing the soil around each plant. Make sure it’s set at exactly the same level it was growing. Better higher than too low and smothered.

Make a well around it and water twice, preferably with half strength liquid fertilizer to encourage new root growth. If the sun is hot, provide shade with a paper bag or big flowerpot for several days.

Water weekly (no more fertilizer) until mid-September, then drastically cut back the water so the plants can harden off before winter. Mulch if possible during winter. Fertilize with 10-10-10 or similar in early spring before growth starts.

And that’s all there is too it. Well almost.

But there are some caveats:

– Divide only big overgrown clumps if you want them to bloom next year. Plant 3 -5 strong shoots in each new clump for earlier bloom, particularly hosta and daylilies. Single shoots will grow as well, but may take longer to reach blooming size.

It’s interesting that if phlox is dug in late summer or early fall, a circle of new plants will arise next spring from the root tips that remain. This does not happen with spring transplanting.

Special Tips:
Flower particulars:
– Iris likes it’s tubers to be about an inch below the soil surface, but it’s stringy roots planted downward. If it has 5 leaves in the fan, it will bloom the next year, 3 leaves won’t. Plant iris in a circle of about 6 with the tubers facing inward. New plants grow out from the shoot end. Destroy any tubers that are soft or rotten as they may been attacked by iris borers.
– Daylily: a clump of 3 good shoots with good tubers will bloom the next year.
– Hosta (Plantain lily): 3-5 shoots makes a better clump.
– Peony will not bloom if it’s "eye" (the tip of its new shoot for the next year) is buried more than one inch underground.
– Chrysanthemum shoots are healthiest if taken from the outside. The centers of clumps die out as the new shoots grow outwards.

When digging try not to cut the roots especially the ones with tubers (like daylilies, peonies, iris and hosta) or fleshy roots (like poppy, balloonflower and bleeding heart). Sometimes it’s easier to loosen and pull out a clump with a pitchfork than a spade.

But in gardening nothing is black and white though. For really overgrown clumps with heavy matted roots (often hosta and daylilies), one has to actually chop them into chunks, then separate off the broken roots, saving the healthy ones.

Hold dug plants in the shade. The shorter the time between digging and replanting, the better the take. If you can’t get everything planted right away, throw some dirt on the roots and then water well, creating a slurry of mud. The mud coats and protects the roots as well as the necessary mycorrhizae and other fungi attached to the roots.

Before replanting, trim back the overlong damaged roots. New roots usually grow from clean cut ends, so shorter roots produce a more compact root ball, particularly useful if the plant is being propagated in a nursery bed.

The vegetable garden makes a perfect propagating bed. Many plants need a year or more to grow on until they are big enough to make a statement in the flower garden. A row of recovering plants, particularly as they begin to bloom again, will beautify the vegetable patch.

Lime loving plants need a pH of 6.0 to 8.0 to be happy, so in acid soil, incorporate lime at planting time. Lime works slowly. Some plants that like a higher pH are:
astilbe, aster, campanula, calendula, carnation, clematis, columbine, rudbeckia, cranesbill, daylily, foxglove, gaillardia, globeflower, gypsophilia, peony,dianthus (some species), poppy, rose mallow.
But bear in mind that many varieties of the same plant species may be more tolerant of a low pH or even prefer a less alkaline soil. A pH of about 6.0 OR 6.5 usually works for most plants.

Fertilizing perennials: In cold climates, applying fertilizer, especially nitrogen, late in the season produces soft new growth that will not harden off in time for winter and plants will be more likely to winterkill.

The old fashioned common wisdom was to fertilize no later than July. However, with short acting liquid fertilizers, it may be possible to apply some of these a little later in the season.

Normally Fall fertilizer is limited to slower acting chemicals like lime and superphosphate, and is applied after all growth has stopped.

In early spring, granular fertilizer should be lightly worked in the soil around the plants to encourage good growth. It may be applied again in late spring or early summer. If using a slow release pelletized fertilizer, be sure it will be exhausted by mid-summer.