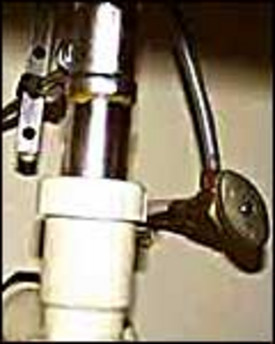 Unlike the supply system, which uses pressure to deliver water throughout the house, the drainage system depends on gravity to take wastewater away. All of the water used in the sinks, toilets, and tubs throughout the house must flow down to the sewer or septic line in the basement via a network of increasingly larger drainpipes. This system is called the drainage, waste, and vent (DWV) system.

Larger pipes allow water to drain quickly. The larger the diameter of the drain pipe, the more water it can handle. In fact, drainpipes are even larger than supply pipes. But its not just because they handle water: Waste disposal also requires space for air and gas buildup, too.

Traps and Sewer Gas
Waste deposited into the sewer line decomposes, producing noxious gases. Traps prevent these gases from backing up and being released into your house. A trap typically is a U-shaped bend of pipe that traps a small amount of water inside it every time you use the appliance. The trapped water acts as a barrier between your house and the sewer gas inside the drain network. Every plumbed appliance in your home is required by law to have a trap. Sink traps are easy to spot; toilet traps are contained within the toilet, and are less obvious. Although these traps are very effective barriers, the sewer gas pressure building up inside the drains would eventually overcome them if the system were not vented.

Venting the System
Venting gives gas pressure a better way to escape your drainage system than backing up into the home. Each appliance has a drainpipe connected to a still larger drainpipe that eventually descends to the basement. The same original drainpipe is also connected to a vent pipe that runs into a still larger vent pipe extending through the roof of your house. These roof vents (some homes have more than one) provide an alternate route for the escaping gas within your drainage system.

Vents also allow air to enter the system for without air the wastewater would not be able to flow out. Think of a gas can or juice can: The liquid inside cannot flow out unless a vent hole is opened to allow air in to keep it flowing. Your home vent system works by the same principle. For wastewater to move freely through the network of drainpipes and out to the sewer, there must be a way for air to get into the system. Otherwise, the drains would empty slowly, if at all. In fact, adequate venting is so important that a partially blocked roof vent can slow your drains to a standstill.

Water moving through a drainpipe also displaces air that’s already in the pipe. If the air has no place to go it will cause a pressure bubble inside the pipe. This pressure buildup will stop additional drain water from entering the pipe. Venting the pipe allows the pressure from the displaced air to escape, again keeping it all flowing.

DWV System Design
There is no such thing as a horizontal waste pipe. All waste pipes must run vertically or have enough downward pitch or slope to allow gravity to do its job and pull the water quickly through the pipe. Drainpipes cannot snake around obstacles within walls, either. Twists and turns can cause slowdowns or backups within the system, so be sure there is enough room for drainpipes to drop on their way to the waste stack or main drainpipe. After all, the last thing you need is a drainage system that doesn’t drain.

The Waste Stack
The large, collecting drainpipe inside the wall slopes horizontally downward and joins a larger, vertically descending drainpipe called a waste stack. The waste stack receives drainage pipes from other appliances as it descends through the interior wall space. When it reaches the basement, the waste stack connects to the main sewer or septic line that exits the house through the foundation.

The Roof Vent
The other end of the waste stack ascends vertically through the roof of the house, becoming a roof vent. At each point in the wall where an appliance is joined to a larger drain line, it is also connected to a vent pipe. These secondary vent pipes, formed at the junctions where appliances run into the collecting drains, are connected to the roof vent. Since every appliance must be vented, there may be two or more roof vents in a given house.

Vent pipes from lower floors must join the roof vent above the upper floor appliances to avoid backups in the system. Unlike drainpipes, vent pipes can run horizontally since gas-air pressure is drawn upward by the lower atmospheric pressure outside the house.