Putting a Remodeled Kitchen to the Test 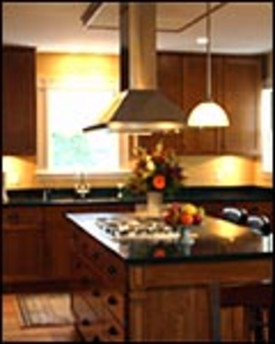 The holidays bring more people, more cooking, and more demand to the kitchen. A well-designed kitchen should balance space for family visits or office parties with cozy space for breakfast. The planning phase should anticipate future needs, but only living in the space can tell how well it succeeds.

Design Plan
The Mashers’ Rowley Victorian remodel showed how good planning made for a great reality. Homeowner David Masher says he and his wife Jeanne “took notes on how we were using the kitchen and what issues we had with it.” It’s important to know how your space is used on a daily basis and at its busiest times to develop an effective plan. “You have to understand your needs and how to communicate them,” Masher says. In the Rowley house, the architect decided an entire wall should be removed, which required redistribution of weight loads—something that could not have been done had they undertaken the project without professional help.

The Rowley kitchen was redesigned with both intimacy and entertaining in mind. Removing the wall between the kitchen and dining area opened up almost half of the downstairs. To create intimacy, an exposed beam separates the dining area for small gatherings and the kitchen’s center island is perfect for family breakfast. A low range hood also makes the space feel smaller when sitting at the center island. Thirty-seven lights allow a multitude of options for making the space feel larger or smaller.

Designing for Traffic Flow
To test their new space, the Mashers hosted Thanksgiving for seventeen people—a challenge for any kitchen. Preparing the meal was easier in the new space because “the cooking was split into three parts: Someone to keep the food warm in the warming drawer, another to do the actual cooking of the gravy, turkey, and everything, and another to put everything onto plates,” Masher says. The center island provided enough room for three prep cooks and space for arriving guests to chat while others circulated on the far side of the island.

Don’t underestimate the benefits of being able to mingle with everyone at the same time, whether they are chef or guest. Plenty of traffic space makes for a smoother party flow. In the Masher’s home, that flow is also enhanced by the addition of a mudroom, where guests can hang their coats and get settled before venturing into the party area. Guests can visit with people preparing food, since the kitchen and entertaining spaces are not separate as they had been in the old design. “You’re able to see and smell the food as it’s being prepared and still ask after Aunt Mildred,” Masher says.

All New Style
The added counter space made buffet service quick and easy in the new space. Serving dishes could be placed on the counter without taking up room for food preparations on the island. A kitchen table with two leaves sat thirteen. The remaining guests were seated around the island, still fully involved in the conversations and in the same room. That number of guests would have been impossible with the old kitchen and dining arrangement.

The redesigned kitchen feels larger than imagined, in part because of windows and better sightlines. A window above the sink brings light in from one side, a large bay window from another, and sliding French doors from a third. Walking into the kitchen also affords a look out the back door. The effect is to bring the outdoors in, both in terms of light and space. Sitting at the table or the island provides and almost 180-degree view of the outdoors. “It feels like you’re sitting outside,” says Masher, “and “Thanksgiving was mild enough that people could venture onto the deck.”

In the Mashers’ redesigned kitchen, the amount of dirty dishes, pots, and pans is often overwhelming during a large party. Deep sinks provide plenty of room to hide dirty dishes and effectively clean large pots and pans so the counters stay clean for dessert. What remains on the counters is hidden from view due to the angles of the cabinets and appliances, which lets everyone relax.

Design Review
If given a blank sheet to recreate the space all over again, Masher says there is little he would change, even after the people parading in and out over the holidays. He wishes he had added another garbage receptacle under the island for food prep waste, and that he had put the motor for the fan on the range hood in the attic for noise reduction—something he now knows was an option. This success is a testament to the hard work that went into understanding and planning the new kitchen as well as a wise selection of materials. “The plan worked,” Masher says—and the party was better for it.