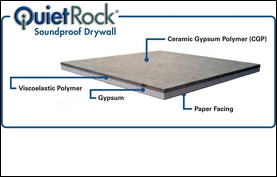 Life is noisy, especially if you have a teenage son who has taken up drumming or a hard-of-hearing mother-in-law who runs the TV at maximum volume or an upstairs tenant who seems to practice bowling in the living room.

Having a quiet home isn’t easy. Sound is sneaky. It finds its way through even the smallest gaps in your defenses—a crack under the door or spaces around lighting. Plus, sound waves are powerful. It takes a lot of absorbing material to make much difference, especially when it’s low frequency sound like your kid’s bass guitar.

Steve Shepard, a University of Alabama associate professor of mechanical engineering, is building a sound sensor to locate people who have been trapped in disasters. He is currently testing a device in a room in which all the acoustic reflections have been eliminated. The walls and the ceiling are covered with a foam-like material and are insulated with recycled denim. The outside walls are 18-inches thick, and the inside walls and flooring float on springs to prevent vibration. “It’s quiet enough to hear your heart beat,” Shepard says.

Obviously, most of us can’t achieve that level of silence, but there are things Shepard has learned from building the room that are useful lessons for someone whose demand for quiet is less exacting.

Bob Hodas, an acoustical consultant based in Berkeley, Calif., who specializes in in-home sound studios, also contributes some soundproofing advice. Even his celebrity clients, including George Lucas and Rick James, have to keep the noise down.

Simple Fixes Make a Difference
Here are some practical soundproofing tips from Shepard and Hodas.

Start by moving the speakers off the floor and away from the walls. If your kid is leaning against the wall while he plays drums, get him a comfy chair for the middle of the room. If his drum kit is sitting on the floor, put it and him on a carpeted riser.

Seal the air gaps. “It doesn’t take a very big air gap to let a lot of sound through,” Shepard says. “It goes under doors, through gaps in the windows and under walls that don’t fit tightly against the foundation.”

Do a thorough job weatherstripping and caulking. Put a compressible rubber gasket across the bottom of the doors. Insulate and caulk around the light switches and the electrical outlets.

Take off the narrow quarter-round molding used to cover expansion space next to baseboards and caulk the space between the walls and the floor, then put the quarter-round back and caulk again. If there is no quarter-round, add some.

Windows are the weakest link. If you don’t have double-paned windows, consider them. If that is out of the question, cut 1/2-inch sheets of Plexiglas™ or any kind of clear acrylic and fit it over each window. Don’t put it right on top of the window glass; leave some air space. Secure the clear acrylic tightly and caulk it. Do the same for sliding glass doors if you can avoid using them.

Eliminate hollow core doors and replace them with the solid-core variety. If you’re really desperate, hang two doors on opposite sides of the same jamb, staggering the heights of the doorknobs. Or, put the hinges on opposite sides so the doors swing in opposite directions. This is good for keeping the sounds of your son’s drumming inside his room.

There are also doors made to be less acoustically transparent. Hodas recommends the QuietZone® from Owens Corning.

The Thicker the Walls, the Quieter the Room
If your guitar player has his amp up to 100 decibels, consider an extra layer of sound-deadening drywall. There’s more than one manufacturer of this product, but Hodas recommends 5/8-inch panels of QuietRock® made by Quiet Solution.

When you install the new drywall, add a layer of sound-dampening glue, which resembles peanut butter between two pieces of bread, but it works, according to Bob Orther, senior technical director of Soundproofing America Inc., in Sunnyvale, Calif., a nationwide company that specializes in soundproofing homes and businesses. Orther likes Green Glue®, which you squeeze like caulk between the two layers of drywall before you screw them together. Green Glue dampens the transmission of sound, making it harder for it to move through the second drywall layer.

The soundproof quality of a wall is rated by sound transmission class, or STC. A higher STC number indicates a more soundproof wall. A typical interior wall with ordinary 1/2-inch drywall on each side of 2×4 framing has an STC of about 34. But 5/8-inch Quiet Rock claims an STC of 51. Doubling it won’t get you double the soundproofing, but it will get close to the ideal, which is an STC of 66. At that point, you’ll probably still be aware of the incessant thump, but you won’t hear the music or the yelling.

Adding insulation to the existing walls is often recommended, and Shepard and Hodas say that it can’t hurt but it won’t help dramatically either. Hodas advises that adding R-11 fiberglass between the studs is plenty; anything more is overkill. If you’re not opening up the walls, then blowing in cellulose has a similar, if limited, effect.

If you have the walls open, wrap pipes and heating ducts with fiberglass to keep the sound along the pipes. For optimum sound control, frame the pipes with their own insulated, drywall box.

Don’t Forget the Ceiling and the Floor
Carpet absorbs sound, which is why professional practice rooms usually have wood floors that enhance the sound. But until your rock star can afford his own private, acoustically superior practice space, carpet over a thick pad or an acoustic floor mat. Owens Corning carries a QuietZone® Acoustic Floor Mat that reduces sound vibrations and lessens noises. Even better is a drywall subfloor to help reduce vibrations.

The best way to add an extra drywall floor is to remove the carpet and padding, then cut the drywall to fit as tightly as possible without using nails or screws, which will transmit sound. On top of the drywall, add a layer of plywood. Seal the seams with tape. Then, put the carpet and the pad back down.

If the problem you’re trying to deal with is the upstairs neighbor who bowls every night at 3 a.m., start by getting rid of any can lights in the ceiling. Hodas says if you must have recessed lights, you can wrap them in rubber, but it won’t help much because the metal will still vibrate. The best idea is to replace recessed lighting with track lighting.

If there’s room and you have the ceiling open, insulate the space with R-30 fiberglass. If not, consider adding a second ceiling of 1/2-inch soundboard connected to the existing ceiling by resilient channel, strips of metal with an offset that keeps the new drywall about 1/2-inch from the old drywall. No matter how you hang it, caulk where the new layer meets the wall.

Ultimately, all three experts say leakage is the enemy of soundproofing, so the tighter you make a room, the better.