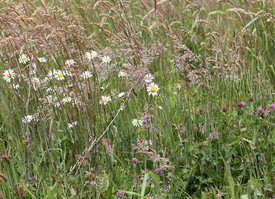 It may seem that the way to escape from the lawn care trap is to have a meadow. Meadows are easier than lawns because they don’t need so much mowing and they don’t need fertilizing, liming, and watering. They do, however, take a while to get started and brought under control. If a regular lawn is left to go to seed and mowed infrequently, it will usually become a satisfactory meadow. Turning a wild or barren area into a decent meadow requires planting the desired species of grasses and can take a year or two. After the meadow is established, regular mowing will keep it attractive.

If a meadow is never mowed, it will gradually revert to tall weeds, then scrub and brambles, then small trees and thicket, and after a hundred years or so back to forest. That is the natural succession of land. More and more people prefer the informal look of a meadow, although it doesn’t fit in every neighborhood. At least not yet.

How to Start a Meadow
The secret of having a meadow near a house is to edge it with a neat border that is taller than grass with seed heads, at a height of about 2 1/2 feet. The border may be of low-growing shrubs such as spirea, bulmaidii, bush roses, tall hosta or small evergreens. Another technique is to keep a neatly mowed wide strip at the beginning of the meadow and around its edges, particularly along the driveway.

Establishing wildflowers in a meadow is complicated and requires choosing the right grass seed (a non-invasive, clump-type sheep fescue) and flowers suitable for the soil, exposure and climate. Turning the soil provides a better seed bed and regular watering or irrigation helps the wildflower seed germinate well. In this respect it is not much different from starting a new lawn.

The first year usually has the most flowers. Gradually they get crowded out by the stronger, bigger plants, and invasive grasses overpower the more delicate early flowers. This is especially true if the soil is rich and has barnyard grass seed in it. Most natural wildflower meadows exist because one or a few species do best in that soil, in that exposure. It is hard to approximate the ecosystem niches, but it’s worth a try.


Once established, wildflower meadows can be maintained by carefully timing the mowing schedule to favor the desired wildflower varieties. For instance, if spring wildflowers such as violets, Canada mayflower and ajuga are wanted, the field is not mowed until after they have flowered and gone to seed (about June 15 in the Boston area). If summer flowers such as daisies, black-eyed Susan, coreopsis and Queen Anne’s lace are wanted, then the field is mowed early, before these flowers bud (perhaps some time in May or early June). Then it is mowed again after they have finished flowering and gone to seed. This keeps down the later, taller plants such as goldenrod and aster that would otherwise crowd them out.

Micromanagement of wildflower meadows is an imperfectly understood science. Only experimentation can show which mowing dates favor which wildflowers. But a meadow that’s mowed occasionally is definitely less work than a conventional lawn, if you don’t mind the rustic look.