Time to Relish the Tomato Harvest 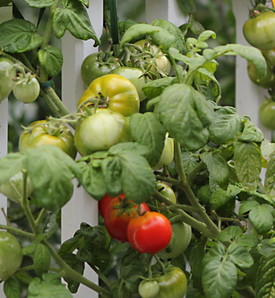 This is the season they produce with abundance, and sweeten our meals with their red, ripe, juicy deliciousness.  Their red color is provocative. Just like females.

When brought back from Peru in the 15th century, the tomato upset the Church of Rome.  Called an evil aphrodisiac, it was not actually eaten until about the 18th century.   Thomas Jefferson, after retiring in 1809, was one of the first to plant it in his garden.

The poor tomato was never tasted because it is a member of the same poisonous family (Solanacae and Nightshade) as the ancient mandrake, which is a source of atropine, scopolamine, and many other alkaloids. Mandrake was a pagan Witches’ Plant.  It was inebriating, euphoric, an aphrodisiac (at least the scent),  gave visionary wisdom, was used to predict the future, and of course, as medicine. Christians demonized it.

So when it’s relative, the delicious red tomato appeared, clergymen and politicians were aghast.  They imagined it was Eve’s forbidden fruit, banished to remote Peru.  Which may even have been the original Garden of Eden.  The fruit gave eternal life, and so on and on.

When I looked up Love Apple on the web I got over 2 million results. Which tells us is that you can find almost anything you want to believe on the web.  And also that sex obsessed politicians are an age old phenomenon.

Tonight I sat down to a lovely plate of tomatoes given to me by my tomato expert, Rocky Albano.  They are yellow and orange and red.  One is even a true Love Apple, a heart shaped tomato with a pointed top and an indented bottom, grown from his father’s seeds that came originally from Italy.

Each tomato has a slightly different taste.  Some sweet, some saucy. some lemon flavored, or with a hint of special flavor.  True tomato tasting is like wine tasting.  When I did  the Massachusetts Agriculture Department Tomato Tasting Contest on City Hall Plaza in Boston, it was a serious thing.  And a gourmet pleasure.

One of the experts from the Department told me that she thought tomatoes grown with organic fertilizer had more taste.  However, too much organic fertilizer produces mostly leaves and fewer fruits.  Tomatoes need higher phosphorous and potassium and less nitrogen to produce well.  A red mulch is supposed to grow a better crop.  Rocky thinks that tomatoes grown up as vines taste best.  Grown on the ground they taste earthy, and ones with too much chemical fertilizer are tasteless and bland.

Tomatoes are easy to grow, but not easy to grow well.  Of course the variety determines the various tastes.  But only when fresh picked.  So buy only from local farms to enjoy the true pleasure of this season.

This week I went to Wilson’s Farm in Lexington to their Tomato Festival.  Their varieties were so spectacular.  The fruits so perfect.  I could camp out at their store for a few weeks and do nothing but eat.

The Wilsons are a 5th generation local farm that has expanded into a great food store, with plants and garden supplies as well.  I would rather have their good produce and reliable food than cheap stuff (frozen from Asia or South America) in the big market chains.  Our local farms are a national treasure.

Tis the season of the harvest.  A time of plenty and gladness. And a sad twinge as summer passes.   Let’s hope that our holier-than-thou politicians don’t introduce a bill to outlaw the inebriating, euphoric aphrodisiac, sensuous, wicked, tomato.

Ruth S. Foster is a landscape consultant and arborist.  More gardening information can be found on her website, www.mothersgarden.net.