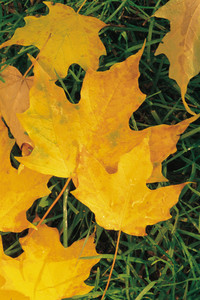 1. The leaves change color. Fall is here. It is a season to savor. To watch the falling leaves as they slowly flutter to the ground. To enjoy the art show which changes day by day, outside our very window.

The reds are the most visible. They begin with the red swamp maples and the rampant vine, Virginia Creeper (Parthenocissus quinquefolia) whose Latin tells us it has five leaves. It climbs up and up, a column of red, 50 feet, particularly on sickly and dying trees in conservation areas. Virginia Creeper grows with poison ivy which colors a little later.  Everyone who gets its itchy rash knows that old proverb, "Leaves of three, Let them be."

Both of these vines are extremely invasive. They spread from any little bit of root or seed and are impossible to eradicate. However, because they are both native to North America, they are not on the designated list of Bad Invasives, which must be of foreign origin. Just because a plant is native here is no reason why it can’t be called what it is.  An Invasive.  If it’s bad it should be controlled, just like the foreign Invasives.

The changing colors of the leaves is governed by temperature.  Warm days and cold nights.  One good frost and suddenly the landscape is ablaze with golden yellows, orange, reds.  There is a well known sequence by particular trees that begins with yellow leaved birches and  maples and ends a full two months later with the oaks and beeches, and also the scarlet Japanese maple (Acer palmatum) which is my favorite.

The many colors are in the leaves all season but the green of the chlorophyl masks them.  When the chlorophyl is destroyed by cold temperature, the other colors show through.

The intensity of the color depends not only on the plant variety but on its health and vigor. And especially enough water. This year’s erratic rainfall has left the leaves dry and more brownish than bright.  Plants are much more sensitive to small climate changes and global warming than are people. This year’s growth has been odd, I think. Erratic.

2. As fall progresses, my tomatoes are producing like mad as they do every fall.  The old expected date of the first frost in my area, used to be about October 15th, but who knows what it will be this year. Tomatoes are very sensitive to the least kiss of Jack Frost so I always watch the nightly weather report on TV to see when there will be an expected frost.  Then I can throw a sheet or big plastic over the plants to protect them and get usually a couple of weeks or more of harvest.

If you had any bit of tomato blight this year, throw away all the plant residue. Do not compost it. If grown in pots, don’t reuse that soil for tomatoes next year.  If in the ground, change the location where you grow tomatoes next year and consider resistant varieties. The blight was spread around many areas of the country from tomato plants grown in the south by a very large big box chain store. The problem is that the blight remains in the soil, in the plant residue, and is air borne, to boot.

At the fall season’s end, one has to harvest all the tomatoes.  My grandmother used to preserve them in big glass jars, and then sterilize them in boiling water and steam.  It was a big lot of work.  One year, the sterilizing wasn’t thorough enough and they exploded, speckling the cellar ceiling with red splotches which remained there forever.  Like modern, non-objective art.

3. Actually October is a most beautiful month, so despite the wacky ways of Washington, enjoy the month. Its glorious weather. Its tomatoes.  Its glorious colors.  It’s Mother Nature’s work of art.

Ruth S. Foster is a landscape consultant with more garden info on: ruthsfoster.com.