Expanding a One-Story House: Build a Second Story or a First-Floor Addition? 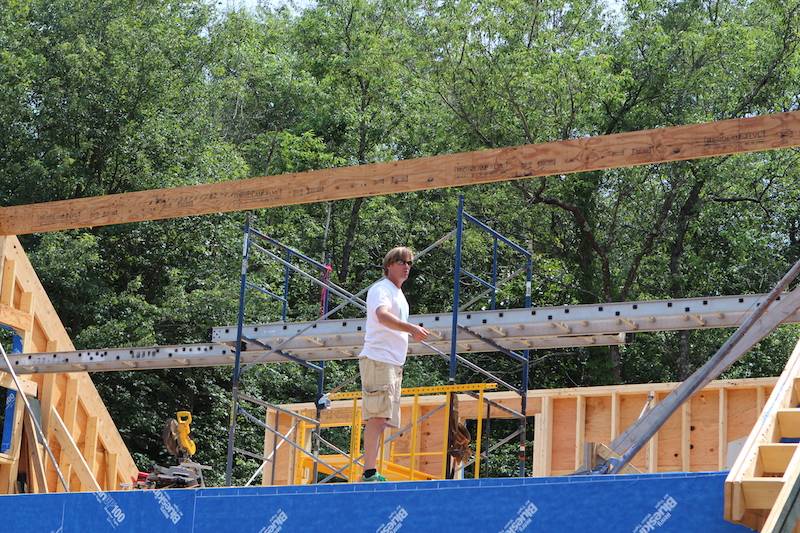 You’re expanding your home, but should you build up or out? Enlarge the footprint of your single-story residence or add a second floor? Before you call in the architect, here’s what you need to consider.

Julie Languille and her husband, Larry, love everything about their 1,200-square foot home on Whidbey Island, Wash.—everything, that is, but the size. The Languilles are members of the sandwich generation, simultaneously caring for their 9-year-old daughter and Julie’s parents. Their existing cottage, originally built as a fishing shack, was no longer big enough to meet the demands of their lifestyle.

Expanding their home out, rather than up, was an easy decision. They had the land. The house sits on two acres, easily accommodating plans to enlarge the home to nearly triple its size: 3,400 square feet. But it was more than just that. “A single story is accessible to my disabled mother and still makes it possible to keep tabs on my daughter,” Julie says. “I’m in my 40s and my husband is in his 50s and we wanted to age in place. The home will stay functional for us much longer if we don’t have to navigate stairs.” There was one more reason for expanding out. “With a single story, we were able to configure the home to maximize natural light, which is important here in the Pacific Northwest.”

Over on the opposite coast, Beth Butler’s decision on which way to expand her home was a little more difficult. When she and her husband, Dennis, learned they were expecting a third child, they agreed they would “expand on our existing piece of paradise” in Tampa, Fla. They just weren’t sure how. “My mom kept suggesting going up and my husband kept insisting going out,” Beth says. “Mom won—as we moms so often do—and we love, love, love it.”

Their four-bedroom, 1,860-square foot ranch is now a spacious six-bedroom, 2,400-square foot, two-story residence with lake views and a great vantage point for the Fourth of July fireworks.

Getting Started
Your local municipality may have the final say in any expansion plans. Check with government offices to find out about zoning and setback restrictions before you make too many plans. In addition, some homeowners associations have guidelines that must be followed in order to keep neighborhood streetscapes conforming. Also, if you live in a historic district or historic home, you may have additional restrictions. (For more information on renovating a historic home, see “Renovating Historic Homes.” The sidebar entitled “Resources for Historic Renovation Projects contains helpful links to resources specializing in these remodels. Also, see “Preserving Your Home’s Original Style during a Renovation” for ways to preserve the integrity of a home’s original architectural style during a renovation.)

Even if you’re not limited by local restrictions, it’s wise to adopt a good-neighbor policy. You may be able to go up but at what cost? Will it destroy your neighbor’s view or privacy—and possibly your relationship? Butler says she “really kept the neighbors in mind” when planning her expansion. A side window that might ordinarily have looked out over the neighbor’s pool and hot tub was changed to a skylight instead. “We were very cognizant of our neighbor’s lot line and privacy.”

Weighing the Options
Aesthetics play a critical role in any major expansion. Many ranches are expanded stealthily into the backyard, so there’s no change to the façade. A second story, however, can dramatically change the look of the home. For a
seamless integration, the design needs to be compatible with the existing architecture. When an addition looks like an addition, it’s often a sign that it was done by a contractor and not an architect, says Fernando Pages Ruiz, president of Nebraska-based Brighton Construction and author of Affordable

Remodel: How to Get Custom Results on any Budget (The Taunton Press, 2007).

That wasn’t an issue for the Butlers who say their second-story addition is barely visible. “You can’t tell we went up,” says Beth. Because the added story is off to the rear and shrouded in palm trees, it’s “very deceiving. It didn’t change the look of the front of the house. It still looks like a ranch.”

Planning an expansion forces you to consider a myriad of issues, not the least of which is how well you can tolerate living through the construction. When expanding out, the existing home is largely left intact. But if you pop the top and add a second floor, you can count on more disruptions, a factor that may come into play in your decision. Ceilings need to be constructed, walls need to be rebuilt. Crews are breaking into the existing structure, which means your home—and your family—need to be well protected from the elements.

According to Ruiz, a good licensed contractor can handle any type of expansion project, but if you’re adding a second floor, you need to make sure he has a reputation for quality control. “It’s not a question of whether he can handle the structure and framing, but if he can handle protecting the structure adequately and provide for the family’s comfort, well-being and safety,” Ruiz says. “You really don’t want a sloppy job if you’re exposing the interior of your home to the elements.”

Cost Considerations
Adding a second story typically costs less than expanding the footprint of your home. That’s because one of the most expensive components in housing construction is the foundation, says Ruiz. Blowing out the ground level means more foundation is needed and that runs up the budget. “If you can take advantage of the existing foundation, you can save quite a bit of money,” he says. The other major expense is the roof. A 1,600-square-foot roof on a ranch, for instance, requires only about 800 square feet of roof on a two-story Colonial.

The Languilles knew the budget numbers were not in their favor when they made their decision to keep their home a single level. “The functionality was the higher priority,” says Julie. “We just wanted the space to work really well for us.”

Determining which way to expand is one of the biggest questions a space-deprived homeowner will ever face. But when lifestyle, aesthetics and budget are carefully considered, the answer often becomes self-evident.