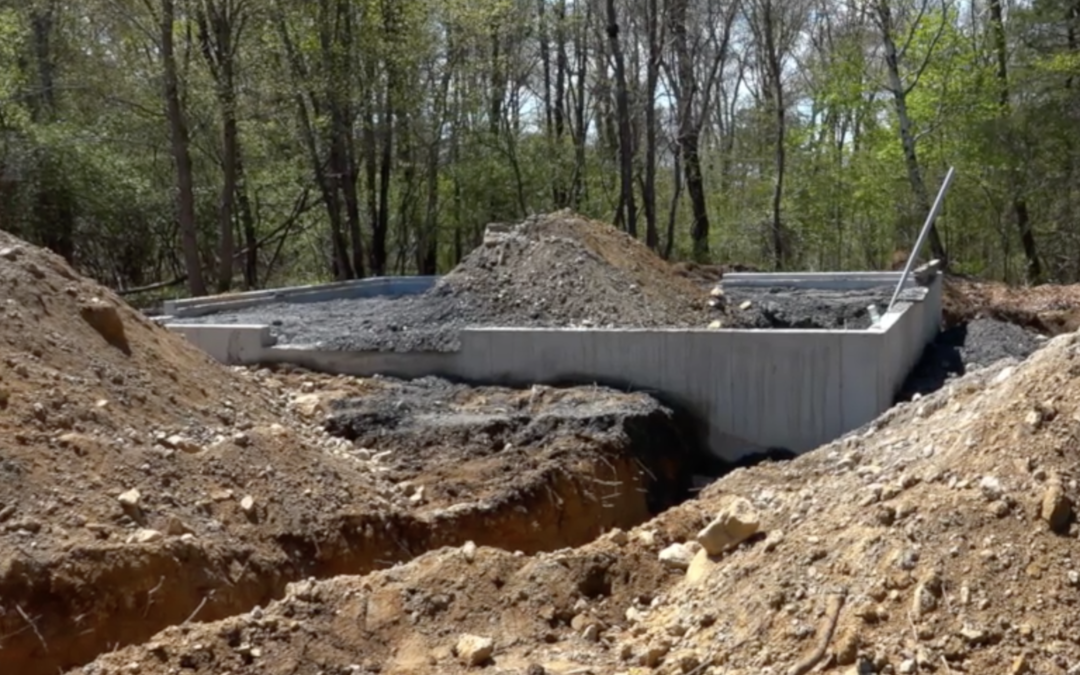 A solid foundation is essential for any home. But today’s emphasis on “green” suggests that other factors be considered as well.

A good foundation is important. It helps a house withstand vertical and horizontal loads and protects from frost heaves.

Foundation Basics
Foundations are typically made of concrete, concrete block, brick or stone with a few even using wood. While there are several types of foundations, the main three are slab, crawlspace and basement. Each type has its own special needs that must be understood.

Slab. This is a concrete slab that sits directly on the ground and forms the lowest floor of the house. The slab may be supported by independent footings or integral beams.
Crawlspace. This type is generally a continuous perimeter footing with the lowest floor of the house suspended above the ground. The area within the perimeter and between the ground and lowest structural floor component is a space large enough to crawl through.

Basement. The excavated space below the main floor supported by footings and with walls and floor. It can be totally underground, as in a full basement, or partially below the surface, as in a garden basement or even in the form of a walkout.

Many factors influence our choice of a home foundation. Affordability, water tables, soils, climate, even hazards such as earthquakes figure in.

Emotions play a huge role. Often, people just have an idea of how a house should look, how it should sit, says William Weber, senior research fellow at the Center for Sustainable Building Research and lecturer/adjunct assistant professor in the College of Design at the University of Minnesota. Others might associate a full basement with bonus living space or believe it has higher appeal at resale.

Some have the idea that a basement is cheap and easy. In reality, it is anything but, says Joseph Lstiburek, Ph.D., P. Eng., author and lecturer, principal of Building Science Consulting and leader of one of the Building America program teams for the U.S. Department of Energy.

Making It Green
Any foundation—constructed correctly—can be “green,” depending on your definition. For many, green means durable, comfortable, affordable, dry, energy-efficient and healthy. To obtain that, the home’s architect or designer has to have a clear understanding of the issues and the design has to be followed through.

The Building America program of the U.S. Department of Energy notes that “poorly constructed crawlspaces can contribute to mold problems, indoor air problems and inefficient operation of the home’s mechanical equipment.” It notes that a livable basement requires appropriate methods to insulate walls, control moisture and heat and cool the space and that slabs require proper insulation to prevent heat loss and increase comfort.

Ashley Katz, communications coordinator of the U.S. Green Building Council, says selection of a foundation should be a conscious decision based on a full evaluation of what best meets the homeowner’s needs and its environmental impact.

UMN’s Weber says that if people do choose to build a basement, for example, they should plan to build it right so it is a habitable space. He sees growing interest in basements for single-family affordable housing with the intention of using it for bedrooms or play areas. For that reason, good water protection, insulation, radon protection, waterproofing and exterior drain tiles are vital.

Weber says builders are paying more attention to detail to bring green results. He sees homeowners learning about issues like water management, from gutters to ensuring the hard grade around a foundation drains water away. But he still sees a lack of awareness about radon.

Changing Perceptions
Building expert Lstiburek says that if people truly want to go “green,” they may want to consider slab foundations. “Slabs use less energy and fewer resources than crawlspaces and basements,” he says. “They also cost less. And so at the end of the day, they will eventually win out economically.”

He commented on these often-heard statements regarding slabs versus crawlspaces and basements. He offered these thoughts about why slabs make a green foundation.

A basement merely to plumb a house, to run ductwork and to make it easy to remodel a house later is “a waste of enormous resources for convenience that is not really convenience because there are other ways of doing it that they have not considered that are also convenient,” Lstiburek says.

“At the end of the day, folks will build basements because it is an emotional response not a logical response,” he adds. “And the response is more emotional the more regional. But the costs of materials, labor, energy (resources) are pretty brutal in favor of slabs over crawls and crawls over basements.