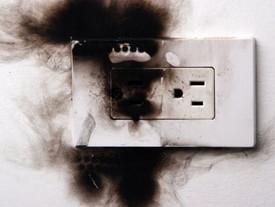 The Problem
During a typical year, home electrical problems account for 67,800 fires, 485 deaths, and $868 million in property losses. Home electrical wiring causes twice as many fires as electrical appliances.

The Facts
December is the most dangerous month for electrical fires. Fire deaths are highest in winter months which call for more indoor activities and increase in lighting, heating, and appliance use. Most electrical wiring fires start in the bedroom.

Prevent Electrical Problems
Studies of electrical fires in homes show that many problems are associated with improper installation of electrical devices by do-it-yourselfers. Common errors that can lead to fires include the use of improperly rated devices such as switches or receptacles and loose connections at these devices. Both can lead to overheating and arcing that can start fires. Fires are still caused by people using the wrong size fuse or even putting a penny behind a fuse when they don’t have a spare. These practices are very dangerous. The fuse is a safety device designed to limit the electricity carried by the circuit to a safe level. Electricity and water are a bad combination. All electrical devices installed outdoors should be specially designed for outdoor use. Outdoor receptacles as well as those in kitchens, bathrooms, and anywhere else near water should be the ground fault circuit interrupting type (GFCI).

Use Electrical Devices Safely
Light bulbs, especially the newer halogen types, get very hot and can ignite combustible materials that get too close. Clothing or towels should never be placed atop a lampshade and table lamps should not be used without a shade where they might fall over onto a bed or sofa. Most light fixtures are labeled to show the brightest bulb that can be safely used in that fixture; too high a wattage bulb can cause the fixture to overheat and start a fire. Extension cords are a common cause of electrical fires. You must be careful to use only extension cords that are rated for the power used by the device they are powering. Extension cords should never be used as a long term solution to the need for another receptacle. Extension cords must never be run inside walls or under rugs or furniture. Extension cords can get warm in use and must be able to dissipate this heat or they can start a fire.

Maintain Electrical Safely
The insulation on electrical cords can become damaged by wear, flexing, or age. Do not use any cord that is stiff or cracked. Some clues that you may have an electrical problem are: