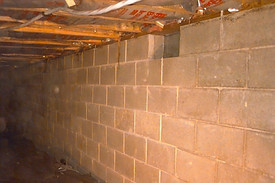 The crawl space is not an area where many homeowners dare to venture. It is often dark, damp and cold—uninviting, to say the least. If left “unfinished,”

this seldom-visited underbelly of the home can reduce the indoor air quality of the living areas above, cause moisture-related problems to the structure of the home and increase utility costs. A qualified basement or crawl space contractor will be the homeowner’s best bet for finishing the home’s crawl space.

Crawl Space BluesCrawls spaces may appear to serve little purpose, but in truth they have a few important functions. To start, a crawl space may have been used in place of a basement to save cost. The crawl space elevates the home off the ground (as opposed to a slab), which can be a necessity in particularly damp or termite-prone locations. The crawl space can also house the plumbing and ductwork of a home and grants access to repair or service those systems. They may not be transformable into a game room or den, but clearly the crawl space adds some benefit to the home.

The unfinished crawl space might also be increasing energy costs. Many crawl spaces have built-in ventilation to allow airflow—a code-enforced design originally intended to mitigate moisture. The latest studies on crawl space ventilation indicate that, in some climates, ventilation is actually contributing to moisture and humidity in the crawl space. Furthermore, ventilation allows winter cold to have free passage under the home, which can result in higher heating bills. Fortunately, there are some simple ways to “finish” the crawl space to reduce the moisture issues and increase energy efficiency.

Moisture Mitigation: Vapor Barriers and EncapsulationThe elimination of moisture and reduction of humidity in the crawl space is crucial to a healthy home. This step will help control mold growth, wood rot and insect infestation, which can also alleviate any rodent issues. Reducing moisture can put an end to any mustiness or unsavory smells emanating from the area. It will also prevent the hardwood floors above from warping.

An encapsulation system usually sees a moisture/vapor barrier or “liner” installed up the walls of the crawl space and over the exposed earth floor. Proper installation methods of an encapsulation system will vary from climate to climate and are dependent on the specific products used, but it often includes overlapping the liners of the wall and the floor, taping all the seams and fixing the barrier to the foundation walls with anchors. The nature of the vapor barrier itself will vary by installer—some use products from outside manufacturers and

some have their own patented and branded system. Vapor barriers differ in composition, thickness, strength or durability and color. Thickness can range anywhere between three to 20 millimeters; both puncture strength and tensile

strength are rated—these are measured in pound-force (lbf). The type of barrier used should be taken into consideration by the homeowner and can be determined by the desired end result. “The homeowner needs to think about how the space will be used,” says Hogemson. “Will the space be used for storage, or is [the encapsulation] just to protect your home?” An encapsulated crawl space that will be used for storage may require a thicker and more durable vapor barrier. A white product will also give the space a clean, finished look.

One of the most important features of the vapor barrier is the water vapor permeance—or “perm”—rating of the product. This measures the transmission of water vapor through the product. The lower the number, the better the product’s resistance to vapor transmission. “Anything with a perm rating below .01 is considered a vapor barrier,” says Dario Lamberti, product manager for the Moisture Control Division of Insulation Solutions. Based out of East Peoria, Ill., Insulation Solutions’ line of products includes the Viper CS, a vapor barrier specifically designed for crawl space application. With a perm rating of .0095, the 6.5 ml. Viper CS outperforms many vapor barriers of 10 ml. thickness or more. “Our product has a cross-woven, reinforced design, which makes it very strong and durable,” says Lamberti. Homeowners should ask the professional contractor which products would be used in a crawl space finishing project. Although a product like the Viper CS may be more expensive than many of its competitors, a homeowner may desire the peace of mind in knowing that the product is going to last and perform as intended.

Just installing a vapor barrier most likely won’t be enough, however. Professionals may recommend installing a drainage system along the perimeter of the crawl space walls and a sump pump to keep the ground beneath the liner dry. Leveling the dirt floor will be an option or a necessity, depending on whether or not the homeowner wants to pour a concrete floor, a more expensive crawl space finishing solution. A level crawl space is more conducive to storage usage and will decrease the chances of tearing a hole through the liner.

Some crawls spaces need a lot of work. Fiberglass insulation may need to be removed and replaced. Broken or leaking pipes, drier vents and other elements found in the crawl space may also be a source of moisture and humidity. A quality professional crawl space contractor will make sure the end result is a clean, dry and healthy room in the home.

Crawl Space Ventilation and Energy EfficiencyFor some time, vents were code-enforced features on crawl spaces around the country. Recent findings have suggested that year-round venting of the crawl space is not beneficial for homes in every climate. In some cases, it can actually have a negative effect on both humidity levels in the crawl space and energy costs in the home.

In the cold winter months, the vented crawl space permits cold outside air into the home. This cools down the pipes and heating elements in the crawl space (furnaces, ductwork, etc.), which can increase utility costs. It also can turn the floor above into an uncomfortably frigid surface to walk on.

“You wouldn’t leave all the windows open year-round in a basement, yet this is what was being done in crawl spaces,” says Tom Saucier, founder of the Crawlspace Doctor, Inc., a crawl space contracting company originally located in Springville, Ind. with franchises in seven states. While most new construction now has the option of vented or unvented crawl spaces, existing homes with vented crawl spaces would do well to cover up those vents. “You want to treat the crawl space just like any other room in the home,” says Saucier.

This process starts by blocking up the vents. Sealing the crawl space from outside air is as important a step for moisture mitigation as installing a vapor barrier. This method will vary depending on the actual vents that are in place. This step may require removal of the vents and installing a new concrete block in its place. In some cases Styrofoam blocks and spray may be used on the interior of the crawl space—the vents stay in place but are rendered useless by the Styrofoam. A professional contractor with crawl space vent experience should be able to determine the best method for a given scenario.

It is important for a homeowner to check local code before blocking off crawl space vents. In some areas vents are required. Flood states, for example, require flood vents in this area of the home to prevent water pressure from destroying the foundation in the event of a flood. Crawl spaces that house a furnace or hot water heater may need make-up air for combustion purposes.

“Conditioning” the Crawl SpaceTo treat the crawl space like any other room in the home means “conditioning” it. In a crawl space that contains the ductwork for the home’s heating system, conditioning the space is as simple as installing a register. This simple step will help keep the crawl space at the same temperature and humidity level as the rest of the rooms in the home. “The air becomes conditioned by using the existing HVAC system,” says Saucier.

Of course, not all homes will have the option of installing a register in the crawl space area. For many homes, it may be necessary to use a dehumidifier in the crawl space area. Dehumidifiers vary widely—from small portable units on casters to crawl space-specific models that can be plumbed in to the home’s drainage system. Similarly, the cost of a humidifier can range anywhere from a few hundred dollars to over $1,000. Units can be installed permanently and hard-piped to the home’s existing drainage or the crawl space drainage. Dehumidifiers will be sized to treat a maximum square footage and have a minimum and maximum operating temperature. They are also rated by the number of pints of water per day the unit can remove from the humid air and the number of pints per kilowatt-hour (pints/kWh). A local HVAC professional or crawl space contractor can help the homeowner determine if a dehumidifier is the best option.

Advanced Energy—a North Carolina nonprofit that deals with applied building science—built 12 test houses with a variety of crawl space designs to determine which design worked best. The findings on its Web site are accompanied by videos and reports that can help a homeowner determine how to best improve their crawl space.

Finishing the crawl space area can be a large undertaking. Depending on its current state, the project may take weeks and cost thousands of dollars. But leaving the crawl space area a humid, musty and energy-inefficient hole in the ground can result in an unhealthy home, substructure damage and high utility costs. Proper encapsulation, ventilation blocking and crawl space conditioning will help green the home and keep the temperature, humidity and energy bills at a comfortable level year-round.