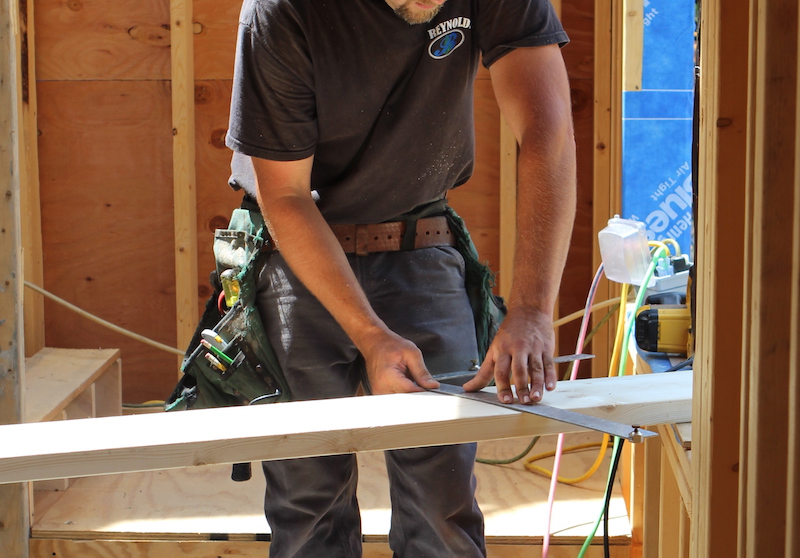 The carpenter’s square is a deceptive tool. It looks simple, it’s a ruler with an elbow, a straightedge that turns a corner. Yet it is a great deal more, because it can function as a sophisticated arithmetical guide to many of the complexities of laying out a wood-frame house.

Every time I pick up a carpenter’s square, it feels familiar. This is one of the practical, substantial tools that always seem eager to go to work.

Made of flat steel or aluminum, the carpenter’s square is actually shaped like an L. Today’s standard model measures twenty-four inches by sixteen inches. However, the flat square, rafter square, builder’s square, and roofing square, other names by which this tool is known, are occasionally to be found in other sizes, including twelve by eight inches or twenty-four by eighteen inches.

In early nineteenth-century references to squares, the eighteen-inch by twelve-inch size is usual, but the tool has been around for centuries. It was used in Europe long before it was first patented in this country in 1819 by one Silas Hawes, a blacksmith in South Shaftsbury, Vermont.

The most common use for the framing square, as its name suggests, is for laying out and marking patterns in framing, roofing, and stairway work. The carpenter’s square can also be used as a straightedge for determining the flatness of a surface. In the workshop, it’s handy for marking cutoff work on wide stock. There are so many uses for the square, in fact, that a new model will usually come complete with a booklet enumerating its applications.

The longer, two-inch wide portion of the square is the blade. The shorter leg is called the tongue, and it is one and a half inches in width. The outside corner where the blade and tongue join is the heel. The flat surface that has dimensions stamped on its is the face; its reverse side is known as the back.

The calibrations on a square vary with its age and the purpose for which the tool was intended. Early handmade models tend to have fewer markings scribed or inked onto their surfaces; more recent factory-made squares may have differing calibrations and tables stamped onto their faces. Virtually all squares are marked in inches and fractions of an inch, usually to eighths of an inch. The markings on the face of a rafter square will probably include a rafter table, which will enable you to calculate the proportional lengths of a rafter once you know its rise and run. There may also be a table of Essex board measures on the back that will enable you to calculate board feet, given the length and width of the stock.

Be aware, too, that dimensions on the back of a rafter square may be in twelfths (for reducing a scale in feet to fractions of an inch) and tenths on an inch (for decimal calculations).

The carpenter’s square is a deceptive tool. It looks simple – it’s a ruler with an elbow, a straightedge that turns a corner. Yet it is a great deal more, because it can function as a sophisticated arithmetical guide to many of the complexities of laying out a wood-frame house.