Are the Bugs Bugging You?

I like to garden but I hate the bugs that bite.  And it’s a pain to have to smother myself in bug repellant just to pick a few raspberries or some flowers for the dinner table.  For a few minutes outside.  But those buggers are just waiting for me because I live on a swamp.

So I don my battle gear.  A long sleeved shirt sprayed often enough that it’s always repellant.  Ditto long pants and socks. They stay rolled up in a plastic bag to hold the repellant smell. I put these over whatever I’m wearing.

But the piece d’resistance is a shoulder length head net..  I think the army designed it because it’s khaki and camouflage.  It keeps, even the no-see-ums,  out of my eyes, ears, hair, etc. but it’s definitely not haute couture.  Also somewhat uncomfortable after a while, but quick and easy protection.

The fine scientists from the county Mosquito Control Project has been monitoring mosquito traps in town for as long as I’ve lived here.  And they’ve treated our infected areas and road catch basins all that time. When needed, they also open up streams that are clogged with debris or fallen trees to prevent flooding or new swamps. They are supported by a minuscule grant from the town for these important health services. And very important they are. 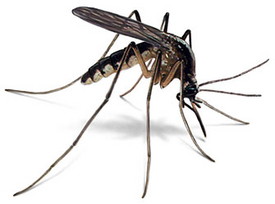 Mosquito borne diseases are not a joke.  The police telephoned to warn of Eastern Equine Encephalitis and also West Nile Virus because infected mosquitoes were found right here in my town.

For centuries mosquito borne diseases have killed many people, more deaths than in all the wars.  Think malaria, yellow fever, dengue and now EEE and West Nile.

I was taken back when touring the colonial Park Street Burial Ground in Boston to see how young the settlers were when they died. Some gravestones were especially sad; young teenage sailors from England, buried so far from home due to disease. There was bad yellow fever,  repeated smallpox outbreaks, as well as many  "fevers".  Half the settlers the first year (1630) died from disease or starvation.

The Panama Canal was almost abandoned because of malaria and yellow fever.  World War II in the Pacific as well as Vietnam had constant illnesses.  Malaria is still rampant and a serious health problem in many parts of the world and when we travel, we have to take preventative medicine.

Over the years, the treatments for mosquitoes have changed. Before DDT, it was done by digging out the streams to keep them flowing and draining the swamps.  Or spreading oil on the water to smother the larvae. Then insecticides worked much better, until we understood that they are not all risk free.

Safer controls have been developed among them biological controls to keep the mosquito larvae from developing.  However the buggers eventually become immune and new ones have to be invented.

I looked at the light that shines on my roses at night.  Around it were swarms of flying bugs from gnats to big moths.  It’s a losing battle.  And the recommended solutions change frequently.   When I have a party outside, I hire a landscape company with a pesticide license to do whatever is currently correct.   No buggers for few days if you’re lucky.

Ruth S. Foster is a landscape consultant and arborist.  More gardening information can be found on her website: www.mothersgarden.net.